Book of the Valley: Story One -- “Cattle Raids”

Tales are woven of love and sorrow, of adventure and magic, a little truth and a little laughter. Great are the deeds done and many of them true, and many more which grow in the telling, and who now may say which is which? Listen, Cymry, and I will tell you tales from the Book of the Valley, tales of the first great Cattle Raid....

Long had the day stretched, and how long exactly is difficult to kin for time spent in the Valley passes not as time passes elsewhere in the world. Fleet had been the warriors and cunning the battles, and many the cattle won and lost and won again. More than cattle alone were traded that day, and upon that hinge will the door of this tale swing shortly. Twilight at last called the Celts to their Tribe fire, there to let the sweat dry from their bodies and the heat to cool from their weapons, and to watch the shadows wage timeless war of their own with the sunlight, winning night with the knowledge that the battle would be lost or won again come morning.

Logs thrown on the past night's embers startled sparks into the darkening skies like fiery bats loosed in hunt for lightning bugs, and the Cymry eagerly settled into their accustomed places to partake of the evening's entertainment. For it is truly spoken that no Celt loves aught so much as a well-crafted story, and so it is told in days past Aonghus Bleidd ap Fainne was beat about the ears by his wife for composing a lusty song celebrating their lovemaking ere the latest lovemaking was quite complete. Any road, the listeners in place and the míd horns full to brimming, the first of the tellers of tales rose to stand in the fire's light.

Iarwain this was, he who it is told was visited by one of the Lords of the far north who traveled from those storm gray lands on a task which is quite a tale in its own right, and who brought rain and thunder to the Valley one summer's afternoon (and other things as well....). And so the first tale was told of the Sun God's love for the Dark Lady, and how the very laws of the Universe were altered for one evening only so that the two (who travel each in hir own...

[Continued in Keltria: Journal of Druidism and Celtic Magick - Issue #42.] 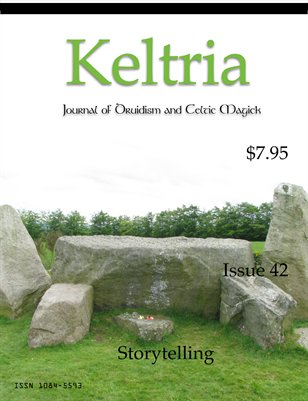 The Henge of Keltria—Druidism for the 21st Century
Tote Bag

Reduce, Reuse, and Recycle with this Tote Bag . These 100% cotton canvas tote bags have plenty of room to carry your Druid stuff when you are on the go or your weekly groceries. They include a bottom gusset and extra long handles for easy carrying.