The Seeress of Prevorst: Her Secret Language and Prophecies from the Spirit World,  by John DeSalvo, Ph.D.

This is a mixed bag of a book. To be sure, there are interesting sections, particularly those about the life of the Seeress (Frederika Wanner Hauffe) and her physician (Justinus Kerner) who, though initially skeptical, became convinced of her genuineness and took her into his family for the last years of her short life. The Seeress was an interesting character, with her prophecies, visions, communication with spirits, idiosyncratic language and script, beliefs about the world and her strange illness. In addition, there is a chapter on Mesmerism, which was used as a treatment for her illness. 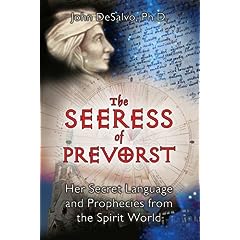 Some of the interesting features of the story of the Seeress are:

o    Soul is the bearer of everything

o    “The world of nature, as seen from within, changes itself thus into a spiritual one. . .”

Despite these interesting features, there is much extraneous material apparently intended to prove the value of séances and spiritualism, including Abraham Lincoln’s séances in the White House. The first chapter of the book is about “The Language of the Spirits” in which DeSalvo asserts the existence of a secret wisdom found in the “Primal Language,” the knowledge of which allowed people throughout history to perform magic or display unusual wisdom. His thesis is full of speculations and leaps of faith that go well beyond logic, rationality and known history. He too often crafts his thesis with questioned possibilities such as “could it be. . .” or “perhaps. . .,” assumes a positive answer, and then goes on to additional speculation as if something has been proved. Thus, he builds one speculation on top of another. It was not convincing to this reader.

Furthermore, he says he does not believe all the stories in the Bible, but then goes on to use numerous Biblical statements as support for his theories. And, where he used Biblical statements as support, he often seemed to make errors in his reading of the Bible, as well as accepting it as historical – even where it is contradicted by well-known history. [For example, he suggests that this Primal Language was possessed by the early Hebrews and taken into Egypt by Jacob; and he accepts the myth that humankind had only one language before the mythical Tower of Babel. The facts of history tell us that the Hebrews did nothing unusual until after their stay in Egypt where Moses (whose name is Egyptian for “child”) apparently absorbed “the wisdom of the Egyptians” along with the monotheism of the pharaoh Ikhnaton. Also, the Tower of Babel myth was invented as a teaching story, which used the by-then ruined temples in Babylon as the foil for their tower story. He also asserts that we are not told why the God of Eden did not want Adam to eat of the Tree of Good and Evil when, in the story, God explains that they (people) “will become like us. . .” (Note here the plural form for deity.) He also claims that Adam and Eve lost their original state of cosmic consciousness when they “willingly” left the presence of God – while the text actually says they were driven out of the Garden by God for having eaten of the Tree.]

Dr. DeSalvo’s naiveté about the history of Egypt is curious as he also authors a website regarding the pyramids of Giza and is the director of “The Great Pyramid of Giza Research Association.”

Among his unsupported and unreferenced claims is that one of Columbus’ motivations for seeking out the New World was related to his presumed Primal Language. Another was that Leonardo da Vinci was a recipient of this mythical secret language who, the author asserts, may have also been the author of a mysterious yet-untranslated manuscript. A final example is when he claims that Carl Jung attributed “the origin of all his ideas” to a series of séances with his cousin. There is no doubt that Jung was deeply interested in “occult” matters, but such a bombastic assertion as this demands its reference. In DeSalvo’s bibliography, there are no books referencing Jung, and several that bear little relevance to the topic.

Although many interesting anecdotes and factoids are scattered throughout the book, it is tainted by its unreliable versions of history, narrow Eurocentric religious perspective, speculation misused as facts, and too many detours for this reader.

Our trucker’s hat is the ideal way to beat the heat. Wear it anytime you want to keep the hot solstice sun off. Up for the long haul, the Trucker's Hat features a resilient polyester foam front with a four-inch crown, nylon mesh weave back, and an adjustable headband for a perfect fit.

Available on line at Cafe Press.